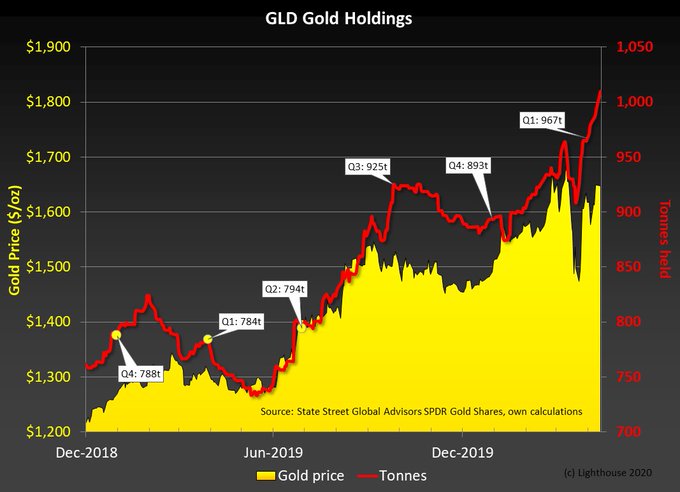 Gold prices have pushed to nearly an eight-year high, and this is only the start as investors should keep an eye on the precious metal's long-term outlook, according to one gold fund executive.
In a telephone interview with Kitco News on Monday, Peter Grosskopf, chief executive officer at Sprott Inc., said that the gold market's future looks bright as the global economy deals with unprecedented stimulus during a time of unprecedented uncertainty.
"Investors should continue to consider gold as a unit of currency or a purchasing power that can maintain its value against other assets," he said.
Grosskopf's comments come as gold prices have soared well above its previous long-term resistance levels at $1,700 an ounce. June gold futures last traded at $1,764.10 an ounce, up 0.64% on the day.
"Gold has been acting very well in the last month. All the technicals show that its uptrend will be maintained in the short, medium and long term," he said. "We would expect to see prices over $2,000 by sometime early next year. That is not a surprise, fundamentally either, in the current environment."
Some markets analysts see limited scope for gold in the near-term as the COVID-19 pandemic pushes the global economy into a recession, raising deflationary fears. However, Grosskopf said that investors should look past any short-term weakness in gold.
He added that there is scope for gold to do well in both an inflationary and deflationary environment.
"If you get deflation and you get a real crash in the financial system, want to be holding some gold," he said. "And if you see through it and you get the recovery, you will now have an extra $6 or $7 trillion floating around financial markets. That is when you really want to hold some gold to protect against inflation. So I don't think as a gold bull, you need to discern right now between the two scenarios.
Last week the Federal Reserve announced a $2.3 trillion loan program for small and medium-sized businesses. This latest action comes less than a month after the U.S. central bank lowered interest rates to zero and introduced unlimited quantitate easing.
Grosskopf said that there is no telling how high the Fed's balance sheet will go before the latest economic crisis is over.
"The forecast of the Fed's balance sheet in the next two or three months is somewhat akin to looking at a nuclear explosion. The Fed's balance sheet is going to explode higher," he said.
While demand for gold is expected to go higher, Grosskopf said that potential investors need to more discerning when it comes to the precious metal. A significant issue that has been raised in the gold market in the last few weeks is physical demand versus the paper market.
Grosskopf said that there are growing fears in the marketplace that when June gold futures contracts rollover, there won't be enough metal for delivery.
"The volatility in that futures versus spot price shows that there are stresses in the system, and the stresses are related to physical delivery," he said. "Nobody right now wants to trust the paper."
However, Grosskopf added that he expects the supply issues to be worked out before June contracts expire. He added that people will get their gold, but they might have to wait.
"If there is a failure to deliver of any significance," he said. "Then you're going to see such a scramble into the physical bull markets, and the gold price will hit a record right away and it won't look back."
If investors are worried about not getting their physical gold, Grosskopf said that they should look at allocated funds. Although these have a little higher premium, investors don't have to worry about supply issues.

Website of Different Investment News and Analysis Under One Roof