Boeing has had a roller coaster ride over the past three weeks.

Starting March at $275, it hit a low point of $95 on March 20, and has now swung back up to $180, closing the day out on Friday at $162. At this point it's impossible to know what it will head but I would suggest buying Puts or selling if you have any BA left.

Here's Why:
1) Manufacturing will be temporarily halted by COVID-19.
2) Demand for Commercial Airlines is going to dry up.
3) Delays to Military Aircraft Production will further increase Boeing's contracting Woes.

New York (CNN Business)Boeing still expects to get some help from the federal government. Just not the same kind of help that the airlines are set to receive.
Although the federal government likely will end up owning stakes in the nation's airlines, taxpayers probably won't receive shares of Boeing (BA).
The aircraft maker asked for help from the federal government on March 17, as the airlines, hotels, restaurants, retailers and other industries were simultaneously requesting assistance. And there is potential help for Boeing in the $2 trillion coronavirus relief bill that just passed Congress.
Although some of those other companies, such as airlines, will likely get direct government grants to weather the crisis, Boeing said it was looking primarily for loan guarantees, which can lower the cost of borrowing and make it easier to find loans.
Boeing CEO Dave Calhoun was asked earlier this week about how he felt about the prospect of the government taking a stake in his company in return for help, he said he was not in favor of such a move.
In an interview on Fox Business, he said that if the government required an equity in exchange for help, that Boeing would "look at all the other options, and we've got plenty of them."
"If they attach too many things to it [government assistance], of course you take a different course."
That comment prompted Treasury Secretary Steve Mnuchin to suggest Friday that Boeing would not be getting any help from the government.
"I can only comment on what Boeing has said publicly, which is Boeing has said they have no intention of using the programs. That may change in the future," he said in an interview that was also on Fox Business.
Boeing confirmed after Mnichin's comment that nothing had changed and that it would seek federal help.
The bailout programs requiring an equity stake include the $25 billion in grants for airlines and a separate pool of $17 billion that would be available for companies like Boeing that are deemed to be "critical to maintaining national security." But the aircraft maker doesn't intend to ask for direct aid, only for the loan guarantees.
"We need to know the credit markets are open, not just for us but for the entire supply chain," he said in a interview on CNBC. 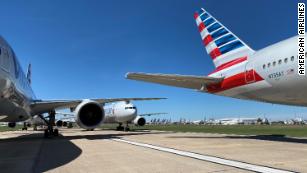 $50 billion airline bailout won't be enough by itself to save US industry
So far the credit markets have been open to Boeing. It still has an investment-grade credit rating, despite recent downgrades. And it was able to borrow $13.8 billion from a syndicate of major banks in February, before the coronavirus crisis sparked a crisis in the global airline industry but well after the problems and costs of the 737 Max crisis were apparent.
It also announced it would suspend the dividend that it has paid continually since 1942. Last year the dividend cost Boeing $4.6 billion. And while it spent billions repurchasing its shares in recent years, the company stopped those share repurchases last April to conserve cash after the 737 Max was grounded and deliveries of the plane stopped. It doesn't expect to repurchase any shares for at least several years until it pays down the debt it has run up because of the Max.
The government did take stakes in major banks and in General Motors (GM) during the bailouts of 2008 and 2009. But that was because it was injecting capital straight into those companies. The Treasury sold most of their stakes in those companies long ago, although it still controls a majority of mortgage lenders Fannie Mae and Freddie Mac.

Website of Different Investment News and Analysis Under One Roof